The ICSI procedure is explained in detail by Jean Scott, Laboratory Manager at Fertility Solutions.

Intracytoplasmic Sperm Injection (ICSI) is a process that involves direct injection of a single sperm into the cytoplasm of a mature oocyte and was inadvertently introduced in Belgium in 1992. However since the introduction of ICSI there have been over a million children born worldwide using the technique. This technique offered hope to many men would have previously not been able to conceive using any other method.

Patients are prepared in the same way as for standard in-vitro fertilisation (IVF) and therefore will undergo stimulation, monitoring and oocyte pick up (OPU). Sperm too, are prepared similarly to the process of in-vitro fertilisation using a density gradient in order to obtain a sample which contains ‘the best of the best’ sperm. However, obviously for ICSI the concentration of sperm is much less than that required for IVF. It is not until the oocytes have been retrieved that they are treated differently.

Due to optimal maturity of an oocyte occurring between roughly 39-42 hours post hCG trigger, it is ideal that the injection process occurs during this time frame. As such, the oocytes that have been collected during oocyte pick up will have the cumulus cells surrounding the outside removed during this time and roughly an hour prior to injection. Only mature oocytes (those that have extruded the polar body) can be injected and it is usual that not all oocytes collected will be mature.

At the time the injection is performed, sperm are selected based on both their motility (how well they move) and morphology (how they look). These sperm are then immobilised using micromanipulation and a very fine glass pipette (called the injection pipette); this involves breaking the sperm tail and placing the immobilised spermatozoa into the diameter of the injection pipette. The oocyte is then held using micromanipulation with the other hand and a slightly larger glass pipette (referred to as the holding pipette). The oocyte is then positioned so that the polar body is located at 12 o’clock, this is done in order to minimise the damage to the oocytes mitotic spindle. However, unfortunately not always will the mitotic spindle be positioned directly under the polar body, which often means that the oocyte may be damaged during the injection process.


What Happens After Injection?

After injection of the sperm into the oocyte with ICSI, the biochemical process by which the oocyte-cell takes the sperm head apart and reassembles its chromosomes (and hence its genes) occurs in the normal way. As a result fertilisation is not guaranteed, but it is expected that roughly 60-70% of oocytes will fertilise normally. It is also estimated that roughly 5-10% of all oocytes injected will be damaged during the injection process.

The oocytes are then cultured in the same way as in standard IVF procedure and assessed for fertilisation on the day post OPU. Embryo development and quality will then be assessed in the subsequent days following fertilisation; usually on days 3 and/or 5. Checking the embryos only when needed to assess fertilisation, move into new media or for transfer helps to minimise the effects that environmental changes (i.e. temperature and pH) have on the developing embryo.

The video above was conducted on July 18, 2013 with Fertility Solutions’ Laboratory Manager and Trainee Scientific Director Jean Scott. The transcription of the video appears below. 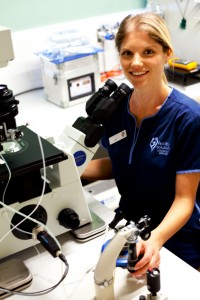 The Difference Between IVF and ICSI

I guess one of the interesting things is in regard to the difference between IVF and ICSI. So, in regard to that the IVF procedure in regard to stimulation and also a work up to the egg collection is exactly the same for IVF or ICSI.

However, the difference then occurs at the lab when the eggs are returned and when we’re deciding on what the method of insemination is going to be or injection. With ICSI, what we do is we basically use it to be able to assist patients with a male factor infertility. With that, that could be that there is, for example, a low sperm count or low morphology.

When Is ICSI Useful?

So, in regard to morphology that’s how the actual sperm look, whereas concentration or count is obviously how many are actually within the sample itself. The other thing [ICSI] can be used for is when the motility – so how well the actual sperm are moving – is core, as well. The other times that ICSI is useful is if there is a high degree of sperm antibodies. So, with sperm antibodies what happens is that can effect fertilization. So, with IVF what happens is that we put the sperm and the eggs together in a dish and let them do their normal thing. So, the sperm still need to penetrate through the shell of the egg to be able to fertilize it, whereas with ICSI what we do is we select a single sperm and basically inject that directly into the egg itself. So, therefore ICSI actually stands for intracytoplasmic sperm injection.

Checking For Egg Maturity Prior To ICSI

So, with that process basically we need to check to see whether or not the actual egg is mature before we inject the sperm into the egg. So because of that what we do is we actually remove the cells from around the outside of the egg and make it so that we can now see whether or not there is an actual polar body. That polar body shows us that an egg is mature and therefore willing to accept the sperm in. At that time, what happens is that then we can say that the egg is mature. We then will go ahead and basically choose a sperm based on how the sperm is actually moving and also how it looks – so, that’s the morphology again of the actual sperm.

Okay. So we can now go into the video.

So, as you can see basically what we’ve got is we’ve got an injection pipette, which is a fine glass pipette that we’ve just now collected a sperm into. Basically, what we want to be able to do is to get that sperm so the actual – we suck it up with the actual tail – so, that the head is actually going to be first into the actual egg itself.

Now, on the left hand side what you can see is a larger glass pipette, which is the holding pipette and that’s used to hold the egg in place. Up there at 12 o’clock, you can now see that we’re positioning that polar body – so that’s the thing that was showing to us that the egg is mature. And you’ll be able to see that there’s no cells now around the outside of the egg, as I said. so that we can tell whether or not that egg is mature and suitable to have a sperm injected in.

Now, what we’re going to do is we’re going to basically bring that sperm down closer to the end of the pipette before we actually then go inside and pierce the actual membrane and the actual oolema. We then suck back until there is a break or a snap – and you could have seen possibly if you were closely looking – that the sperm quickly goes back. That then basically allows us to be able to put the sperm inside of the egg itself and then remove the pipette out, which is what we’ve done.

We now are going to remove the egg from off the holding pipette and that’s just using the other pipette and just making sure that it’s not still attached.

Here, you can see that the egg itself is still showing the line or the actual area where we’ve just gone in with the actual needle – injection needle. What’ll happen though is over time that will disappear and you won’t be able to see that anymore. And then basically and roughly around about 18 to 20 hours later, we check this on to the fertilization.