PICSI is an extension of Intra-cytoplasmic sperm injection (ICSI) and stands for Physiological Intra-Cytoplamsic Sperm Injection (PICSI). Similarly to ICSI, it involves the selection of motile sperm for injection, but rather than simply using conventional visual cues (morphology and motility), it involves selecting mature sperm which bind to hyaluronic acid. Hyaluronic acid is a major component of the cumulus complex which surrounds the egg/oocyte and provides a selective barrier that excludes functionally deficient sperm during fertilisation in vivo (within the body). It does this by only allowing a sperm that carries a hyaluronan specific receptor to bind and penetrate the cumulus complex of the oocyte.

This, therefore, means that a sperm’s ability to bind to hyaluronic acid (HA) is a biological maker of the sperm’s maturity and DNA (or deoxyribonucleic acid, is the hereditary material in humans and almost all other organisms) integrity.

How Is PICSI Performed? 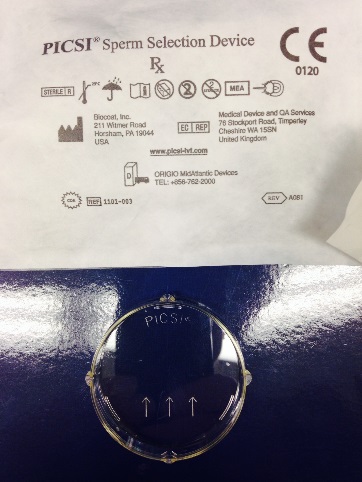 The PICSI dish is manufactured in the United States and comprises of three (3) microdrops of hyaluronan attached to the interior bottom of a sterile polystyrene culture dish. Prepared sperm are then added to the micro-droplet and given a period of time to exhibit binding (this is usually between 15-30 mins). A sperm’s ability to bind to the hyaluronan hydrogel therefore assists the embryologist with selecting functionally competent mature sperm for injection.

Given that hyaluronan binding has been shown to be correlated with increased sperm maturity, improved sperm DNA integrity and a normal chromosomal complement, this in turn means better quality embryos for selection and pregnancy compared to conventional ICSI. Studies have also shown that early pregnancy loss can result from selecting compromised spermatozoa during ICSI.

Who May Benefit from PICSI?

PICSI is not recommended for all patients and this is because of the additional amount of handling that is involved in the procedure and subsequent environmental exposure of the oocytes (i.e. changes in temperature and pH). It has been shown that only roughly 15% of all ICSI patients produce sperm samples with compromised HA binding and therefore it would be these patients that would benefit from PICSI.

Below is a list of patients for which PICSI may be recommended:

NOTE: PICSI and sperm binding is dependent on sperm concentration and therefore may not be able to be performed for all patients who are suitable for conventional ICSI.

Credit: Video above was originally sourced from: Sitiope

If you have further questions about Physiological Intra-Cytoplasmic Sperm Injection (PICSI), please feel free to contact Fertility Solutions Sunshine Coast on (07) 5478 2482 or by email.