The Confusing Story of Endometriosis

You have just been told that you could have endometriosis – now what?

Endometriosis is a common and often painful condition that affects approximately 10 – 15 per cent of women. It occurs when the lining of the uterus/womb (called the endometrium) grows outside the uterus. The displaced tissue commonly grows on the uterine (fallopian) tubes, the ovaries or the tissue lining the pelvis (called the peritoneum), or on the bladder or bowel. How this happens is really unknown although there are many theories. Below are a few of the more common ones: 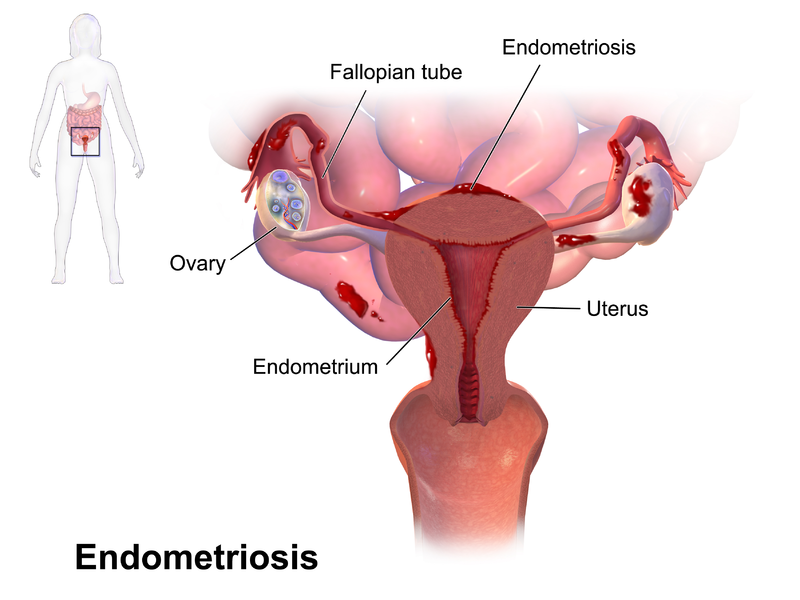 Endometriosis Questions You May Have

Having been told that you could have endometriosis can be very confronting for a patient. What does this mean? You have a million questions that you want answers to:

Often, after seeing your GP, the next doctor you will see is a gynaecologist with or without a fertility interest. Sometimes doctors will advise a laparoscopy (key hole surgery) to see if you have the condition, but is this the first treatment option?

You should do your own research if your doctor has suggested a laparoscopy just to “see”, especially if you do not have any symptoms of endometriosis such as:

It is important that patients realise just because a laparoscopy allows the doctor to see if there is any visible endometriosis present (not all endometriosis is visible) and treat the disease, unfortunately endometriosis lesions, even once surgery has been performed, often come back as early as 6 – 12 months after your operation.

Often patients are led to believe that removing the disease spots will improve their fertility and allow them to have a baby, and as such, they agree to the surgery – especially if they also have pelvic pain because of their endometriosis. However, there are two major problems with this way of thinking.

First, there is no evidence that treating mild endometriosis improves fertility. It is not uncommon for a woman to have had a laparoscopy for other reasons and the doctor incidentally finds endometriosis that was not causing any apparent problems. It’s important to understand that a lot of fertile women who have had no problems having babies have endometriosis.

Secondly, the surgical removal of endometriosis can itself actually result in fertility challenges. While removing chocolate cysts (endometriosis deposits on the ovaries), the doctor also often ends up removing healthy, normal ovarian tissue. This further reduces ovarian reserve and ability to produce eggs.

The extent of endometriosis and the appropriate treatment is a controversial issue. Mild endometriosis most likely does not affect fertility at all – and can be left alone. Severe endometriosis is a more complex issue, and management needs to be individualised, based on what your goals are. For information on degree of severity refer to https://www.asrm.org/Endometriosis_booklet/.

The decision to treat endometriosis with a laparoscopy presents the patient with a lot of difficulties. To assist in the decision making process, consider the following important points:

If you are over the age of 35 and under 40 and have not started or completed your family – time is of the essence for you. It is important that you consider more aggressive fertility treatment options in order to get pregnant as soon as possible. This is where IVF may be able to help. The good thing about IVF is that not only does it maximise the chances of you becoming pregnant – once you get pregnant, your disease will reduce in severity, and you will be pain free. Now that’s a bonus!

However, if getting pregnant is your primary goal, and the diagnosis of endometriosis was an incidental finding (for example, when it was diagnosed during a baseline vaginal ultrasound scan), then your priority should be on maximising your chances of having a baby quickly by using assisted reproductive technology. Either way, the message is you don’t have time to wait, so do everything you can to become pregnant in the shortest possible time.

If your situation is such that you have incapacitating symptoms which need to be treated (for example, pain during or after sex), then a laparoscopy may be your first choice, as it may allow the doctor to effectively remove or reduce these painful lesions, giving you temporary relief.

Perhaps one of the most important things to establish is your ovarian reserve. Knowing this will help direct the course of action that is most appropriate for your situation.

Women are born with all of the eggs that they will ever have, and they lose them constantly throughout life until menopause, when none remain. Unfortunately, there is no current reliable test that would tell us how many eggs a woman has remaining at any point in time – as well as telling us about the quality of those eggs. The term “ovarian reserve” is used often in reproductive medicine and is an estimate of the “reserve of the woman’s ovaries” – remaining egg supply – to be able to make babies in the future. In short, a woman’s ovarian reserve is her remaining fertility potential.

It is important if your doctor does not offer you this test that you ask them to check your ovarian function, before proceeding further. This needs to be done both by doing an antral follicle count (AFC during a pelvic ultrasound scan), and by testing your blood Anti Mullerian Hormone (AMH) levels.

This is the most recent test that is being used to assess ovarian reserve. AMH is a hormone produced by the ovaries by the developing follicles that contain eggs. It is now thought that it could be an indication of the number of eggs being produced during a monthly cycle. It can be measured by a blood test at any time during the month although women taking the oral contraceptive pill who have an AMH result indicating reduced ovarian reserve should consider having the test repeated after a full month off the contraceptive pill.

It is extremely important to consider your AMH result in conjunction with your age (see chart below). 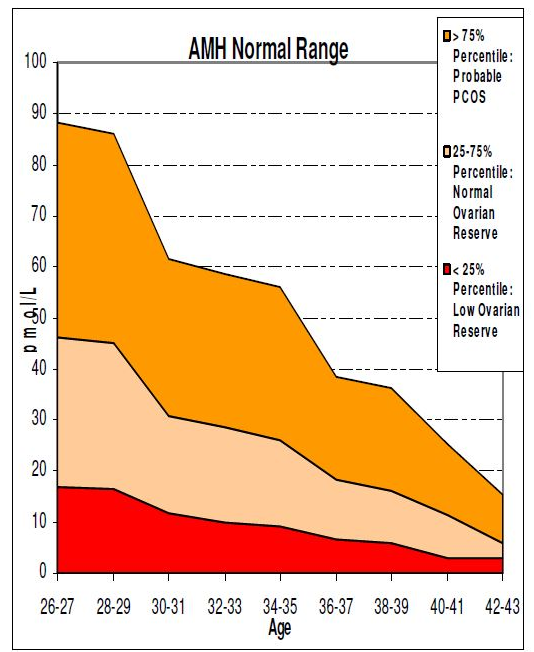 However, if you have a low ovarian reserve for your age, then you need to be cautious about opting for surgery, as this can further damage your ovarian reserve. You might want to consider going straight for IVF treatment.

The problem with surgery is that not only are the results unpredictable, it can actually end up wasting valuable time in which you could be trying for a pregnancy. After the surgery, doctors often put patients on medical therapy for 2 – 6 months (such as Zoladex implants of Synarel nasal spray) to allow the endometrial lesions to heal. These medications work by suppressing any endometriosis deposits that may still be in the pelvis. Often after the 2 – 6 months have elapsed, patients are told to try for a pregnancy naturally for another six months. By the time the patient has waited 8 – 12 months, often the endometriosis is back again.

The rule is simple – think not just about the disease and its diagnosis, but about your age, your ovarian reserve and your final goal – either to have a baby or to be symptom free. If your primary aim is not to “treat the endometriosis”, but to have a baby, then it may well be better to consider bypassing the problem and having fertility treatment rather than trying to fix it with surgery. Food for thought!